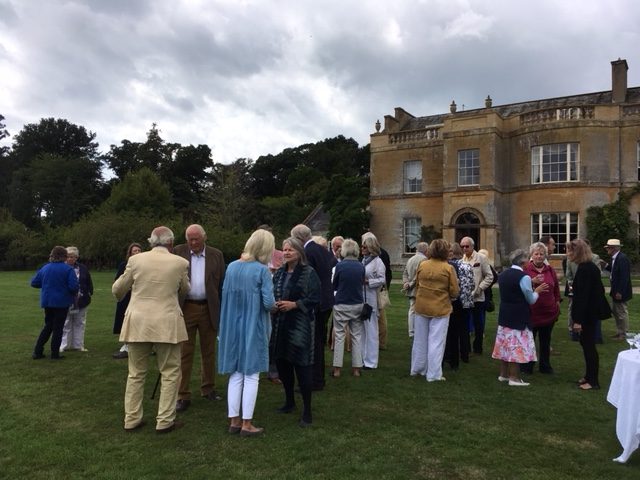 Sponsors and Friends of Bridport Literary Festival have enjoyed a special thank you party in the gardens of Chideock Manor.

It’s the third year the event has been held at the home of the chairman of the trustees, Mrs Deirdre Coates, and her husband, Howard.

“Each year we have a bigger turn out than the year before and we have always been lucky with the weather so we can hold the party in the manor gardens,” she said.

“We were able to announce that ticket sales for the festival events were going really well with more than six talks sold out before the end of August.”

This year’s festival takes place in November at various venues around the town. It begins with children’s events on Saturday 3 November and ends on Sunday 11 November with Antony Beevor, the author of Arnhem: The Last German Victory, in conversation with Lt Gen Sir Barney White-Spunner at the Electric Palace.

Mrs Coates said: “As Bridport is a town with not a great deal of industry, the festival relies greatly on the support of private individuals.

“Fortunately, we have received an enormous amount of support, not only from the ever-growing list of friends, but also from many people who are able to sponsor individual events.

“This is a tribute not only to their generosity but also to the tremendous popularity of the festival which brings great interest to the town at an otherwise quiet time of the year.”

“We also gave information about the special events we arrange specially for the Friends and sponsors throughout the year,” Mrs Coates said.

“In late November there will be a dinner at the Beaminster restaurant, Brassica, where Steven Spurrier will talk about his recently published Wine – a Way of Life.”

Friends of Bridport Literary Festival are given an advance copy of the festival brochure and priority booking before tickets are on sale to the public.

The 14th festival features an eclectic mix of writers on a variety of subjects. These include Great British Bake Off presenter Prue Leith, bestselling author Patrick Gale and writer James Holland, who will be in conversation about his book, Big Week: The Biggest Air Battle of WWII, in this the 100th anniversary year of the RAF.

Programmes are available throughout the area and tickets can be purchased online via bridlit.com or in person at Bridport Tourist Information Centre in Bucky Doo Square, telephone 01308 424901.