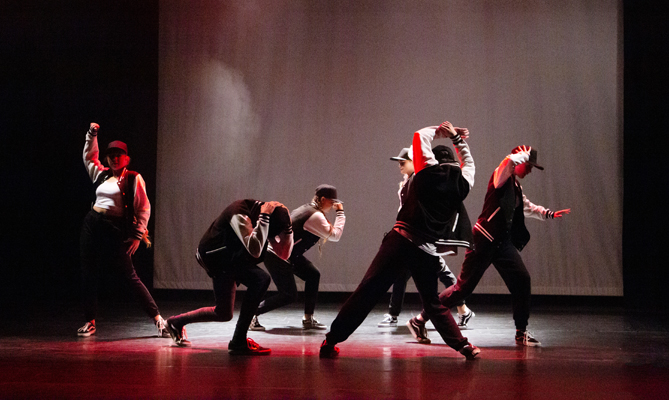 Bridport Youth Dance returned to the stage with a powerful and moving treat, reminding us what we’ve been missing for too long. And once again, they raised the bar. Opening the evening with their short film “Freedom/Connection” was a brilliant choice.

Nikki Northover’s choreography and direction weaved perfectly through the natural surroundings. It went much further than a nice film location. Embracing the rolling motions of the cascading waves; standing high looking over the views; taking flight like a bird all formed the language of the movement.

Memorable motifs appeared to echo the focus and spirit of Tai Chi. I can’t say if that was the intention, but it was my feeling. Gestures rolled like breaking waves, and gravity-defying leaps were reminiscent of fallen leaves in the wind.

Credit must also go to the stunning cinematography. In one moment we were treated to panoramic views; next, we’re enclosed in a tunnel, a shadow cast on the wall. It was composed of delicate poignancy and rugged industrialism. Film-maker Elliot Millson’s appreciation and experience of dance as BYD alumni was evident. Just as essential was the soulful and vibrant music of Andrew Dickson ( The Dance Weavers – Emerging) and Elliot Millson ( The Dance Weavers – Freedom/ Connection) threading the projects together.

As the screen went up on stage the dancers hit the first downbeat with razor-sharp precision. The energetic atmosphere captured the relationship with the opening film was clear.

Drawing all three dimensions of the space in front of us, the fluidity of the dancers demonstrated a sincere connection with the music. One of the qualities of BYD that always excites me is how we always get so much more than marking the count of music. Lyricism and narrative flowed from scene to scene, building the narrative. The narrative scenes with voiceovers delivered sincerity and an occasional sprinkling of humour. It was human, truthful, and honest. Especially notable was the dialogue on mental health, social media, and much more.

A fierce attitude in the street dance was punctuated by expertly held moments of pause. It takes great skill and confidence in any choreographer and dancer to know when stillness captures the moment. It’s the same as a musician knowing when silence speaks volumes.

The blistering attack of the tap was a pleasure to see and hear again. Speed and technical skill aside, the melodic and rhythmic quality was exhilarating. I am always left in awe of how they do it. That’s what true talent is: mystifying in appearance, hiding the evident amount of rehearsal it must take to prepare.

All three dimensions of the stage were filled throughout. As always, BYD managed the transitions with dexterity, keeping the pace up throughout.

I took away a strong message from this show. A powerful theme of the need to communicate and reconnect with each other – and of course, with nature. This has been the voice of our youth for the past couple of years. A yearning to be heard, to combat external oppression, and the internal pain of loneliness. BYD achieves this every time. The company communicates universal themes without falling into preaching to the audience. Essentially, they present us with dialogue through the language of movement.

We’ve all missed BYD’s productions over the past year or so. I recommend visiting their website to follow links to their film work. We need to see more professional dance in Bridport, and we have a resident company that would be our perfect ambassadors.

The razor-sharp skill and discipline, and all the thirsty fluidity in the work is testament to Nikki Northover and the rest of the team. Long may it continue to engage and excite us all.