Home Past Events Robert Brown at the Ropemakers Nov 11 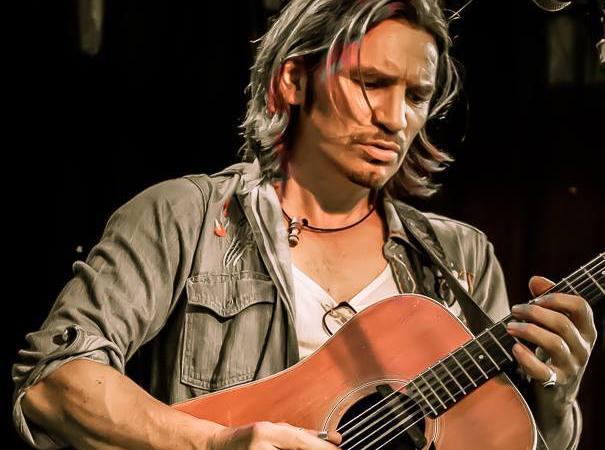 Robert Brown is an emerging singer-songwriter with obvious comparisons such as Nick Drake, Davy Graham and Jimmy Page, not only in his writing but with his remarkable fingerstyle technique. “I was lucky as a kid. When I was 17 I got to tour with Dick Heckstall Smith, and later in my teens I toured the southern states for 6 months with the US funk rock outfit the Blast. It was a crazy learning curve in which I saw our promoter being shot and having Boy Georges producer chasing us all over Houston thinking we were the next big thing and had free coke to burn!” Whilst touring in New York last year, he was also approached by Alice Cooper’s Press agent and tour manager after they heard a particular track. Songs that are remembered the next day seem to be one of his main gifts. Extensive travelling in Europe, North Africa and North America have enabled Robert to absorb the music and culture, and this emerges in subtle rootsy nuances within his work. Some obvious, some hidden to all but the expert ear. “I’m flattered to have had artists use and want to cover my songs, but I won’t sell out for the privilege. I’ve met people who literally try to work out a plan for the fastest way they can sell their souls for a fast buck and 15 minutes of fame. Over the years the music business has come into and out of my life. To quote Roy Harper “It’s not important that I become a millionaire. I’m a sparrow in the gutter. I will always be able to make a living”.