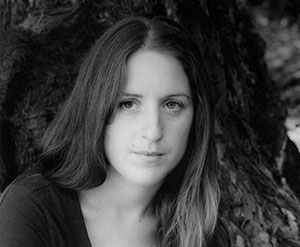 ‘I was born in Oxford where I lived for four years before moving with my father and brother to Charmouth, Dorset. We lived in a house on the Stonebarrow Estate and I attended Charmouth Primary School under John Broadhurst. I went on to Woodroffe School in Lyme Regis, and then university in 2001.

School days were the usual mix of good times and rubbish bits, not at all like the TV sitcoms. However, I made some great friends who continue to be very important in my life.

Living in Dorset was a mixed blessing as a child. The distance to Exeter and any hope of good shopping was rather a challenge and the drive from our house to civilisation was a little longer than I would have chosen – particularly since I refused to walk or cycle, which left me dependent on my father for lifts. I’ve never learned to drive, but luckily my boyfriend does.

After I left Dorset I took every opportunity to come back, bringing huddles of friends who’d given up on the West Country after a visit to Newquay, but were glad to give it a second go when they saw West Dorset. Most summers I come back to Dorset, visit my family, and work wherever there’s an opportunity. After four years in London, it’s a pleasant change to come home and breathe entire lungs full of air without choking. Dangling my feet in the children’s lido in Clissold Park in London, or sitting in a rather nasty beer garden in a city pub, doesn’t compare with being on the beach with a plastic mug of beer during the open air disco.

In 2001 I moved to London to study Law at King’s College; the following year I saw the light and quit, because it was the most boring thing I have ever done. I then did what I should have done before running up the first £4000 worth of student debt, and studied history. This had always been my favourite subject at school, thanks in no small part to the amazing Woodroffe teachers, but I’d been persuaded that since I didn’t want to be a librarian or a teacher, there was no point continuing my studies. I am still not sure what vocational merit there is in having a history degree, but I’m glad I did one anyway.

I completed my degree this summer, specialising in Holocaust Studies, with a dissertation on Italian Holocaust Historiography. I am enrolled to do an MA in Holocaust Studies in 2006/7 at Royal Holloway College in Egham, and then would ideally like to join the Foreign Office. I am now having a year out in Berlin with my boyfriend, trying to get a job, and learn German in time for next year.

However, as many people have pointed out, my boyfriend is English, so it’s going to be harder to learn the language. Now at last I have a bicycle – called Harold. I cycle to language school and back everyday, the only cyclist in Berlin with a helmet – and I’m finally learning to indicate without falling over.

Most of my immediate family live in Dorset, or are heading back that way, and if the Foreign Office had more postings in Dorset I’d be back like a shot. Some of my friends take issue with Dorset life: my urban boyfriend wanted a newspaper at 8pm in Charmouth, and someone else wanted a cash machine between Stonebarrow and North Chideock on a Saturday evening, but they usually settle down.

For me, having spent the last year travelling from London to Croydon, sometimes taking two hours and three changes, I now have a healthy respect for the Axminster Express. I find that, as long as you arrive a little early and are willing to wait a little, the 31 bus will get you to most places as well as any London bus. In Dorset there are no bus lanes, but there are also no taxis parked in them.’ RF