Home Places Far From the Madding Crowd by Margery Hookings 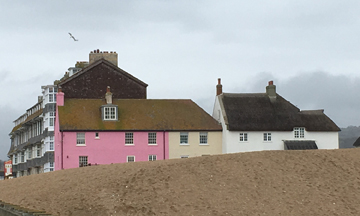 On Easter Monday, we’re setting out from our inland haven and bound for the Bay.

The mist covers the top of Lewesdon Hill, completely obscuring its summit. Ordnance Survey says that, at 279m, this is Dorset’s highest point, although locals will argue with you until the cows come home that the accolade belongs to flat-topped Pilsdon Pen.

Usurper or not, Lewesdon’s tree-clad peak is covered in swirling fog. It’s like a still photograph from the film The Land That Time Forgot. At any moment, a pterodactyl could swoop down and pick up the car.

But the moment passes.

Instead, a swallow flits across from one side of the road at Four Ashes, as if to tell us good times are on the way. It’s the first swallow of summer. And yet so early.

Maybe it knows something we don’t.

Well, there are hints from the weather forecasters that a heatwave is coming to us in mid-April, with temperatures soaring to 15.5 degrees Celsius.

But today down in Bridport, people are walking with hooded heads down, hands in pockets, oblivious to the RAF ensign flying over the Town Hall to mark the service’s 100th anniversary. There are a few shops open – quite a few, in fact – including coffee shops and the bookies but it’s like Bridport on a windswept market day without the stalls and not that many people. 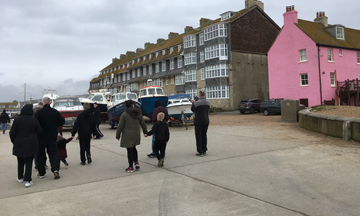 Down in the Bay it’s a different story. Bobble hats and beanie hats and bright boots are the order of the day as visitors brave the briskly blowing breeze. The dirty tide comes rolling in through the mouth of the piers to meet the water gushing through the sluice gates from the river. It’s just as well the pleasure craft aren’t being craned into the harbour this weekend as originally planned. That’s the way that shipwrecks lie. Fingers crossed that 14 April – when the boats are now due to be lifted in – is better than this. 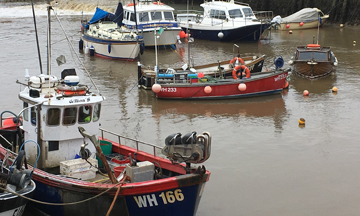 We drive around the harbour and out onto the esplanade where – incredibly in this bitingly cold wind – people are queuing to buy ice cream. We drive to the end and then turn back again and visit the first of several places where we, as locals, know we can park for free. 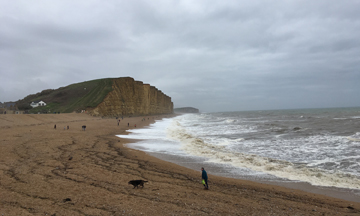 We’re in luck, there’s a space. So, car tucked safely away, we take our visitors for a walk around the harbour and out on to the pier. The waves crash on to the shingle as East Cliff stands guard against the elements. A solitary dog walker climbs up the ridge and a couple walk hand in hand along the beach and against the wind.

On Easter Mondays past, West Bay would be heaving. But this year, this is about as far from the madding crowd as you can get. 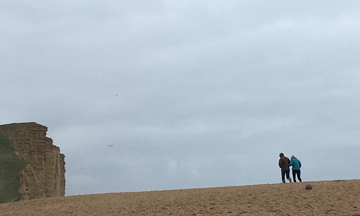 Hardy souls huddle at the kiosks, eating fish and chips before diving into a pub for a pint or hot cup of coffee.

“We were quite busy yesterday, on Easter Sunday,” says one kiosk owner. “But it’s been pretty quiet here all day.”

As we head back towards the hinterland, another swallow swoops and dips alongside the car. I hope it’s not the same one. One swallow does not make a summer. But two could mean we’re in business.