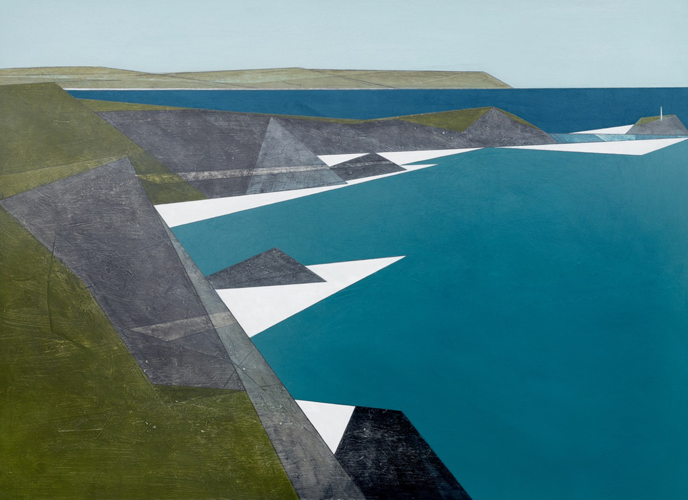 Vanessa Gardiner‘s most recent paintings explore her chosen places in Portland, Cornwall and Skye with relish and confidence. The palpable pleasure of white cliffs against a turquoise sea off Portland or moody grey headlands projecting into dramatic shadowed Cornish coves makes each painting sing with the excitement that made her paint it. The dramatic lines and colour contrasts give immediate impact and yet these are the works of many months of radical repainting and subtle improvements. The more time one
spends looking at these paintings, the more one sees in them.

Vanessa Gardiner paints in a dynamic geometric style enlivened further with lyrical curving lines of hills and pathways. Her colours may be opaque and crisp or more translucent and weathered, scoured and scored, washed back and reapplied, to give surfaces like those of a pebble on the beach. Seductive in colour, texture and composition, these paintings are deepened and intensified by memory. They explore what is known and felt when experiencing the raw beauty of the place. Gardiner’s discipline is always to stay true to
the landscape as she sees it which keeps her work as fresh and vital as the sea breeze.
Vanessa Gardiner is a well-established painter who has been working as a professional artist for many years. She trained at Oxford Polytechnic and the Central School of Art and Design in London. Her work is in private collections around the world and in public collections including Exeter Hospital, Bournemouth University Collection, Carlow Collection Ireland, the Archive of the Ballinglen Arts Foundation Co. Mayo, Cowley Manor, Huddersfield Art Gallery, Fidelity International, New Hall Cambridge, Magdalen College Oxford, the British Academy London and the British School in Athens. She lives in Charmouth, Dorset, with the painter Alex Lowery. They have a daughter, Jessie. 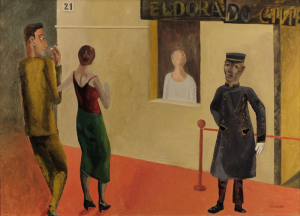 Now in his seventies, Simon Quadrat paints his childhood in run-down1950s London, peopled by a colourful collection of misfits whose faces tell a quite different story from the roles they are playing. The girl in the fairground booth surrounded by targets looks as if she feels a target herself and has seen far worse things anyway.

Simon Quadrat was born in London in 1946, the son of Jewish émigrés who scraped a living after the war having separately fled pre-war Germany in the 1930s leaving everything behind. Simon remembers a truly cosmopolitan family life conducted in many languages, often all at the same time. His father settled into business after the war and they frequently visited Europe, even post-war Germany, to see family. His mother was both a painter and a pianist.

Simon also painted and played piano from an early age but describes himself as a scholarly child aware that he needed to make his living. Simon studied law at Bristol University and established himself as a criminal barrister in the Temple in London and, from 1985, in Bristol where he continued to practice on the Western Circuit becoming Head of Chambers in the early 1990s. When Suzy his first wife died in 1996, his thoughts turned more and more to his passion for painting. In 1999 he remarried to Jenny and with her encouragement gave up the law to become a full-time professional painter.

All his life he has studied art, wherever he went, reading books about it and drawing. He taught himself to paint in his twenties mainly by rushing over to the London art galleries and museums whenever he had a spare hour. The design and astonishing humanity of early Sienese paintings echo throughout his work. However it is the modern British
paintings of the immediate pre- and post-war that are most clearly referenced in his work. His palette of palest blues, ochre yellows and burnt orange seem straight from the fifties, retro and hugely popular now. He paints his memories of growing up in post-war London alongside images he gleans from gritty archive images and documentaries made at
the time particularly the Free Cinema movement and the British Mass Observation Project. These authentic images help to feed his imagination and metamorphose into his highly distinctive multi-layered paintings.

In London Simon is represented by Panter and Hall on Pall Mall. He was elected an Academician of the Royal West of England Academy in 2004, became Academicians’ Chairman responsible for the major exhibitions in the main galleries at the RWA in 2007 and was elected President in 2010. In 2010 he filled Sladers Yard in a highly successful
solo show and has exhibited here since in group shows. In 2012 he retired from the committee of the RWA and moved with Jenny to Wiltshire where he continues to paint. In 2015 he became a member of the New English Art Club. We are delighted to show another major collection of his recent work now.

Simon Quadrat’s exhibition will fill the first floor of Sladers Yard showing alongside the furniture of Petter Southall with ceramics and sculpture by leading artists and designers. Vanessa Gardiner’s exhibition runs at the same time in the ground-floor gallery.