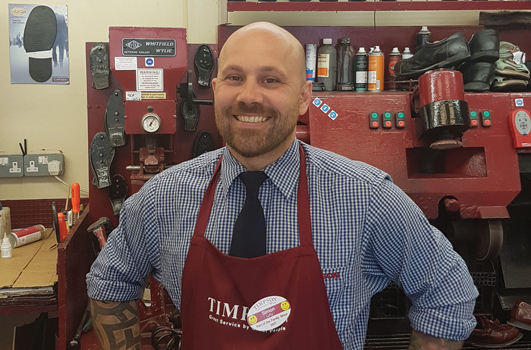 Every morning Simon makes the tea, five mugs of Earl Grey for his wife and four children – “all tea snobs” he says laughing, as he sips at his coffee. Bundling everyone out the door to school, he just about makes it in time to open up the shop at 8.30am. Setting out the signs and starting the machines, Simon is the face and manager of the Bridport branch of Timpsons.

He started in 2000 when it was run as ‘The Menders’, training up in shoe repairs. Now, Simon does everything required in the shop from key-cutting, engraving, sending off the dry cleaning, mobile phone repairs and of course mending shoes. There isn’t much time to pause over the paperwork as Simon has customers walking in throughout the day, dropping off, picking up and asking for advice. He juggles the demands of his customers with completing the work at hand. Often he hasn’t got time for a lunchbreak as he is interrupted with a walk-in, which as he points out doesn’t matter as he’s usually eaten it by 11am anyway. Lucky to have his wife Jody make his pack lunch each day, alongside the children’s, Simon saves his best smile for when he talks about her and how she cares for them all.

Not everything in Simons’ life is shoe leather and rubber glue though. At the weekend he morphs into a version of his earlier life and gets his DJ and disco equipment out. Previously a DJ at a couple of popular night venues in Bridport and Yeovil, Simon now runs Galaxy Discos & Karaoke, bringing the party to dance floors all over the county.

5.30pm brings the end of the working day at Timpsons, when Simon locks up. He might stop for a cheeky half on the way home, needing a short break before the onslaught of four children hits him. “It can be a bit nuts some days, with one hanging off your leg, the other climbing onto your back, as soon as you walk in through the door”, he grins, clearly loving fatherhood, in all its guises.