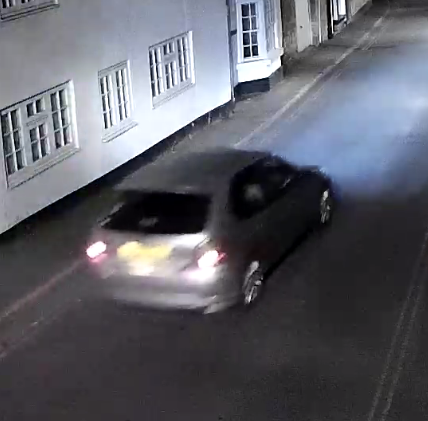 Detectives investigating an incident where offenders targeted a cashpoint in Beaminster are appealing for the occupants of a vehicle to come forward as possible witnesses.

At 4.09am on Saturday 18 August 2018 Dorset Police received multiple reports that offenders were stealing a cashpoint from Fleet Street.

The offenders used a stolen green tractor to extract the cashpoint from the wall of the premises, which was previously a HSBC bank and is now Chris Chapman Bespoke Kitchens and Furniture. They were then seen to make off on foot.

The offenders got into a dark-coloured Audi car and left the scene.

The tractor was left at the scene alongside a green Land Rover Defender, which had been stolen by the offenders from Whitcombe Road in Beaminster.

Detective Constable Adam Pilton, of Weymouth CID, said: “We are currently carrying out a number of enquiries into the incident, including trawls of CCTV in the local area.

“We have identified a small silver vehicle which we believe may have been in the area at the time. I am appealing for the occupants to please get in touch as they may be vital witnesses and have information which can assist my investigation.

“I would also like to hear from anyone who saw the incident, or has any information, and has not yet spoken to police.”

Anyone with information is asked to contact Dorset Police at www.dorset.police.uk, via email 101@dorset.pnn.police.uk or by calling 101, quoting occurrence number 55180133166.  Alternatively, contact Crimestoppers anonymously on 0800 555 111 or via www.crimestoppers-uk.org.