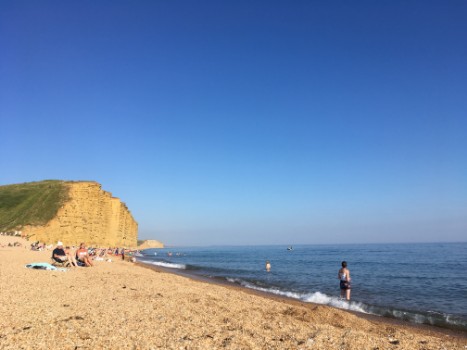 Work on the new sea defence wall along West Bay Esplanade will begin again on Monday. (2/9)

The wall was built earlier this summer, but stonemasons will now return to complete the facing of the new wall, which will greatly improve its appearance.

The Esplanade will be closed while this finishing off work is done. This work was put on hold during the peak holiday season to minimise disruption and allow residents and visitors to enjoy West Bay.

“I am glad we are returning to complete this work, it will greatly improve the Esplanade. We paused the work to minimise disruption during the peak holiday season, but will now get started again.”

The £10million sea defence work, which was carried out earlier this year by Dorset Council and the Environment Agency, will help protect West Bay from flooding.

The project means 148 homes and 112 businesses are now better protected from flooding. The beaches were re-opened in time for the school holidays after round-the-clock working.

The scheme included building a new wall, rock groyne, buried rock revetment and the beach shingle was also replenished. The work had to be done in the spring to avoid winter storms.

Thank you to residents and businesses for bearing with us during the works. More information is available at dorsetcoast.com/projects/west-bay-coastal-defence-improvements/