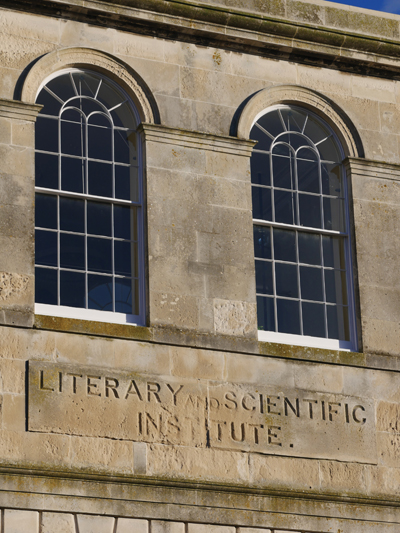 The Literary and Scientific Institute in East Street, Bridport is now open. It’s been empty for nearly twenty years. Remembered by many locals simply as the old library, the Grade II* listed building is taking on a new lease of life.

The winter sun was making its mark on the lovely façade of Bridport Literary and Scientific Institute, as I met up with manager Michele Morgan at the front steps.

This is a place cherished by locals of long standing, who recall strolling around the shelves in its main room, looking at row upon row of library books. With its iconic period lettering on its façade, which proudly proclaims its purpose – complete with obligatory full stop after the words LITERARY AND SCIENTIFIC INSTITUTE.—the building has always reminded me of the old library in the small town Illinois of one of my favourite books, the lyrical and fantastical Something Wicked This Way Comes by Ray Bradbury.

There is something about its solid yet welcoming face, punctuated by seven glorious tall arched windows, that shouts to the world that this is a wondrous place of knowledge and illumination.

The LSI was founded in 1834 as a Mechanics’ Institute to provide education for working men. The building was given to the town by the Liberal MP for the Borough, Henry Warburton. A few years later, it also became home to the Bridport School of Art in 1865. One of its most famous students was Fra Newbery, whose paintings and murals adorn the inside of Bridport Town Hall. He went on to become director of Glasgow School of Art and is credited with bringing Charles Rennie Mackintosh and a number of his contemporaries to international fame and recognition.

During the Second World War, it was temporarily used by American troops stationed in Bridport before the Normandy landings in 1944, including the Medical Detachment of the 2nd Battalion of the 16th Infantry. The Reading Room was used as a Red Cross Recreational Centre for the American soldiers and the first floor was for a time used as a Quartermaster’s Store for the Borough Evacuation Scheme.

From 1952 to 1997, the building served as the town’s public library before the library service moved to new premises in South Street, which had been home to the town’s fire station.

The future of the building was then uncertain, and various groups occupied parts of it until 2002 when the building was declared unsafe.
And from then it remained empty and slowly decaying—it was on the national At Risk register—as local authorities and the community debated its future. But with the support of the Heritage Lottery Fund, Historic England and a range of other funders, the Bridport Area Development Trust—a group of local volunteers—have worked hard to bring it back to life.

For the past year or more, the building has been covered in scaffolding and sheeting. No-one, apart from those in the LSI’s inner circle, have had much of a clue about what’s been going on inside. Motorists and pedestrians have cursed at the temporary narrowing of the road and the possible effect on nearby businesses.

According to its website, LSI Bridport will be ‘a centre for creativity, enterprise and growth. Collaborative and flexible workspaces will be hosted within this unique, historic building.

‘Supporting our community will be event, training and meeting space alongside a café which will have local food at its core. The heritage of the building will be at the heart of the restoration, it will celebrate our town’s strong local history of innovation and be a focus for our future growth.’

Some of us have wondered about how on earth the business space element within the building can possibly relate to yet another café in town, in the room where the library books once took pride of place.

But when the LSI opens to the public later this month, all will be revealed. Having had a sneak preview of the premises, I can see now how its various functions fit brilliantly well together. It’s a real credit to Bridport and those who have doggedly been involved in the project, day in day out, over the years.

I am utterly in love with the work that’s gone into bringing this wonderful building back to life.

On my tour, I can smell paint, hear the buzz of workmen and feel the brushed steel bannisters in the covered courtyard at the back. Beyond this space is a large ‘work hub’ room set up for people who wish to rent office space by the hour. It is light and airy and will soon reverberate to the creative hum of people at work.

There will be 10 hot-desks available here and hirers will have access to lockable storage and a high-quality copier, which will print, scan and fax.
Downstairs, there is a training room and a meeting room, both with 65” interactive screens, teleconferencing facilities, audiovisual equipment and high-speed broadband. The larger room seats up to 30 people and is suitable for training, workshops and presentations. The smaller room is for 10 people and is useful for all types of meeting.

Upstairs, on the first and mezzanine are the tenanted offices, the first occupants of which are crowdfunder.co.uk, an established Bridport business as well as being the UK’s leading crowdfunding platform.

On the stairwell, the statue of Minerva, the Roman goddess of wisdom, gazes down from an alcove. The owl which accompanies her provides a recurring motif for the LSI.

In what was the old library, the light streams in through those lovely arched windows, illuminating and enlightening all at once. This will be the café, which will be open to people working in the building and the wider public.

Throughout, the attention to detail, the colours, the marrying of old features and new, industrial-style elements are a triumph. It’s a dynamic, heady concoction which marries the architectural heritage of the building with its modern-day purpose.
To find out more about Bridport LSI, visit lsibridport.co.uk