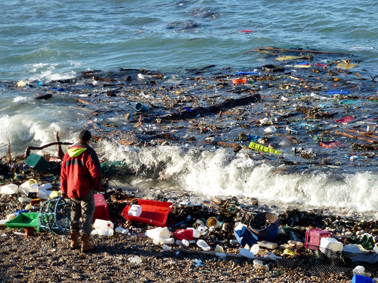 Transition Town Bridport have announced that Bridport Green Fortnight will be taking place again this year between 14-28 April.

Sarah West from the Group said  “We’re keen to build on last year’s success and in 2018 our main theme will be reducing plastic in the environment. We’ve been planning to focus on plastic for some months and recently it has rocketed up the national agenda, so it’s very timely to look at this to see what we can do locally.

World-wide 300 million tonnes of plastic are produced each year, half of it for disposable items and eight million tonnes end up in the sea. In the UK, 38 million plastic bottles are used every day and half of these end up in landfill, so the challenge of reducing plastic waste needs an urgent response”[1]

The fortnight of activities aims to show why plastic generates multiple environmental problems, and how each of us can play our part in reducing these.  Sarah added “the idea that we can’t manage without all these products is false.  Since a five pence charge was introduced on plastic bags, consumption has fallen by 85%.

Like last year we are working in partnership with other groups and organisations to develop plans for the fortnight. Our aim is to encourage everyone to look critically at the plastics we buy, particularly single-use items and consider the alternatives. By making simple changes such as refilling water bottles and using reusable coffee cups, this can have a big impact.  We will be producing a directory showing people where they can buy non-plastic alternatives as well as putting pressure on larger retailers who are responsible for much of the excess plastic packaging.”

Transition Town Bridport are planning a number of events including a film “Plastic Ocean” on the problems plastic causes, talks and an event in Buckydoo Square. They will also be holding a Green Quiz, which was very popular last year.

Sarah West said “We’ll be saying a lot more about these events and especially what Bridport can do to help reduce the plastic waste problem over the coming months.”