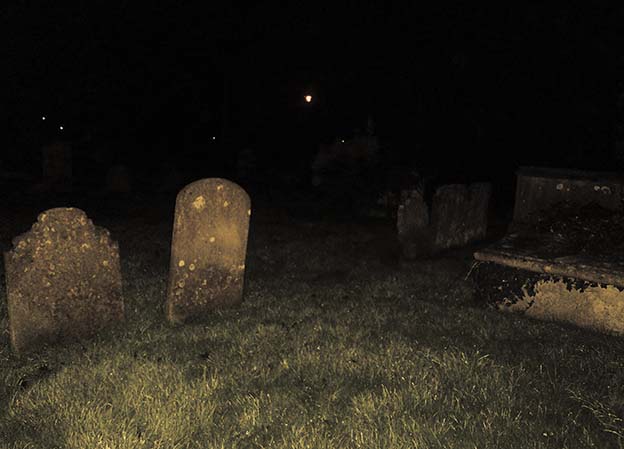 Dipping her toes into the underworld for the Bridport Ghost Walk, Margery Hookings meets Adrian Clements, the man behind it. He reveals a life-long passion for old horror films and British history, which turns out to be a potent combination.

The mist swirls down from Dorset’s highest point as I drive along dark country lanes into town.

It is just the right weather for the Bridport Ghost Walk. Clouds dip and dive around a slip of a crescent moon in a black sky. In the heart of town, people wait in Bucky Doo Square for the walk to begin.

My friend and I hoped our guide would be dressed, Ripper-style, in a top hat and cloak. But Adrian Clements makes up for this lack of drama by his detailed knowledge of Bridport and its history. It’s a town I know well, really well, but tonight I’m seeing it from a totally different perspective.

Who would think, when sitting on a bench in the square enjoying a sandwich in the daytime and listening to the town band, that executions and disembowelling took place here centuries ago? And that women were made to wear terrible scold’s bridles and pelted with rotten food and human waste?

The town has a dark past. Playing a starring role in the ghost walk are tales of the Black Death, when eighty percent of the townsfolk died, the grisly killings in and after the Monmouth Rebellion of 1685 – a dark time in the Westcountry’s history and a subject close to my heart, with ancestors on both sides of my family having been part of the rebel army – and the hangman’s noose, which is known as the Bridport Dagger.

Adrian, our guide, is 48 and lives in Poundbury. Now a father of four, he was born and brought up in Reading.

As a young child, Adrian used go to Hayling Island for his annual holiday.

He recalls: “There was a resident fun fair there, which featured a ghost train. This ride captivated me. I would stand and stare at the fabulous artwork and thrill to the noises and screams coming from inside.

“I didn’t actually pluck up the courage to go on it for several years. But it made a huge impression on me. As did the Saturday night ‘horror double bills’ on BBC television many years ago.

“I became a huge fan of the ‘Hammer Horror’ genre. Peter Cushing and Christopher Lee were my boyhood heroes. Also around this time, I became an avid reader of books about ghosts and legends. I couldn’t get enough of accounts of haunted houses, poltergeists and strange locations where all manner of odd things were said to happen.”

When he was 16, Adrian joined the English Civil War Society and travelled the country re-enacting the battles of the 17th century, which prompted a huge interest in British history.

“I soon realised there was a connection between my love of all things ghostly and ghastly and many of the bloody and turbulent episodes from the past,” he says.

Adrian decided to organise the ghost walks not long after he moved to Dorset from Berkshire in 2009. He became aware of several ghost walks taking place in the area. With his passion for ghost stories and classic horror, it gave him the inspiration to set up one of his own.

He chose Bridport because it didn’t have an established ghost walk, unlike other Dorset towns such as Dorchester, Weymouth and Lyme Regis, which all featured regular tours.

“I undertook a year of meticulous research and spent many an hour in the local libraries and history centres. I also spoke with several inhabitants of the town, obtaining first-hand accounts of ghostly experiences.”

His first Bridport Ghost Walk was in April 2011. “My initial reservations about it being a success were soon dispelled when a large group of people arrived in Bucky Doo Square to hear my stories. I’ve now been running the tours every year since.”

Adrian says the stories he tells on the tour need no embellishment or exaggeration. “I try to make the story come alive but as much of the content is already quite gruesome and dramatic, they entertain and educate without any need for sensationalism or gimmick.

“Bridport is an ancient market town steeped in history. My objective on the ghost walk is to unearth much of its lesser-known past. The town’s net and rope making heritage is well documented and celebrated. But there is so much more to discover. Bloody skirmishes, botched executions, horrible deaths and terrifying apparitions all feature on the walk. Alongside the ghostly tales, it’s a great way to find out some local history.

“Although, for obvious reasons, Halloween is traditionally my busiest time of the year, the Christmas ghost walk is also becoming very popular. It seems people enjoy a good ghost story during the festive season, as did our Victorian ancestors who always told them by the fireside after dinner on Christmas Eve.

“Ghost stories at Christmas time during the 1800s were as traditional as the tree. I like to think my ghost walk in December goes some way in reviving this age old custom.”

On our ghost walk, we weave in and out of the streets, following Adrian down lanes and alleyways, the ghosts of the past ever-present.

We stop outside the museum, with its pair of ghosts. We gather on a street corner to hear the sad story of Silvester Wilkins, a young Bridport boy hanged in Dorchester in 1833 for arson. We move on around the town to the boutique Bull Hotel, which is rich in ghost stories, and then up Globe Lane, where the rotting corpses from the Black Death were left to be picked up by the plague cart. A grisly spectre is said to haunt this cold, narrow alleyway.

And then suddenly, a figure, dressed all in white, emerges from a doorway halfway up the lane and then promptly disappears. An angel of death perhaps?

Hearts beating faster, the smell of freshly-baked bread in our nostrils, closer inspection reveals it to be a baker from Leakers, wondering what on earth is going on.

We walk with tales of the plague pits nestling under the iconic Colmer’s Hill ringing in our ears. We head south, towards the graveyard of St Mary’s Church. In possibly the most eerie part of the trip, Adrian regales us with tales of the big black dog, a Grim, a Shuck or whatever you like to call it. The clock strikes eight as we hope and pray not to see the beast, which is a portent of certain death.

We edge out past the west and south doors of the church to reach the sanctuary of a street lamp and the pavement in South Street. And then the whole party collectively jolts as the clear sound of a dog barking right next to us chills us to our bones.

He knows this not through second sight but because it’s his own dog, which is sitting in his car parked outside the church. And so ends our creepy jaunt around the town, with relieved laughter and a round of applause.