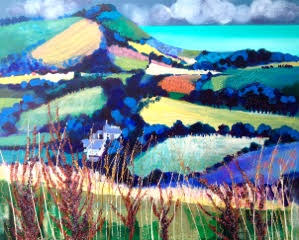 It seems that, even in an artistically abundant location like Dorset, it is unusual to come across a group of artists who seem to ‘gel’ despite their different personalities and styles of work. Each of the artists in The Dorset Five has been active in the area (and beyond) individually for some time, but The Dorset Five have only recently met and discovered each others’ work – and been delighted by their shared values and common artistic ground.

Holding an exhibition, for any artist, is a nerve-racking and sometimes expensive experience, so finding compatible and supportive friends to share the nail-biting time with is a real bonus for all.

Eype Centre for the Arts sees the inaugural exhibition for the Dorset Five, which will run from Saturday June 16th to Sunday June 24th. Called ‘Colouration’ for reasons which will be immediately apparent, the show will highlight each artist’s best work, featuring paintings, collages, paper mache and more. The artists are all determined to make a colourful splash to make their mark on the local art scene as a group and would like to invite as many people as possible to witness something new, energetic and exciting.

Sue Barnes, Zee Jones, Chris Neaves, Chris Wilmshurst and Malcolm Giladjian have come together to create a vibrant visual feast. Most have also been teaching in the area, either in their own studios or in local venues, but all have been exhibiting for some time, both as individuals and as part of Bridport Open Studios and Dorset Art Weeks.

Sue Barnes hails from Cheltenham and gained her degree from Worcester College of Higher Education, subsequently becoming self-employed as a batik artist, working by commission and exhibition. She has since had a very varied career, including running a garden design business and becoming head of a drama school.

Moving to Bridport resulted from numerous family holidays in the area and being impressed by the friendly creative vibe. A studio in Gundry Lane swiftly followed and now provides a base from which to create and to teach. Her students enjoy the flexible lesson times and variety of artistic skills being taught.

Sue’s work encompasses many different media, including collage and paper mache and she currently exhibits both at the studio and as part of Bridport Open Studios and Dorset Art Weeks. It is important to her that her creative passion is expressed through her art, whichever medium she uses.

Surrey-born Chris Neaves worked in a commercial art studio from the age of sixteen, becoming a director of a Design Consultancy in Covent Garden for twenty-five years. Chris and his wife Sue have lived in the heart of Bridport since 2008.

Chris paints views of the immediate area and beyond in various styles and in various media. He has sold through London galleries as well as The Pelly Gallery and The Town Mill Gallery, Lyme Regis and at The Electric Palace and Arts Centre in

Bridport. He now has a permanent display of his own work at his shop and working studio at Cloud9 in Bridport’s Gundry Lane, which also regularly acts as a base for him to exhibit as part of Bridport Open Studios and Dorset Art Weeks.

Zee Jones studied Social Sciences at Middlesex Polytechnic before embarking on a long career as a social care professional. Following redundancy in 2009 she went to Somerset College of Art and Technology and completed an art foundation course.

Based between Dorset and Devon, Zee concentrates on collage, painting, teaching workshops and exhibiting. She has shown her work in London and Lyme Regis and regularly contributes to Dorset Art Weeks. She has built up a loyal following over a relatively short space of time.

Zee’s work has been described as ‘confident, strong with a compelling use of colour and structure. She says ‘I have always been drawn to bold colour and I feel I have an intuitive understanding of how colours work together and how they can affect emotion. I want people to find my work interesting, but above all to touch a place inside them that makes them feel good’.

Painting and Collage by Zee Jones

Malcolm Giladjian was born in Dover, educated in Surrey and studied Art and Design at Brook House College of Art in Wiltshire.

He has spent a good deal of time in France, studying colour and painting and sketching buildings and landscapes in the Loire and the regions of Cher and Berry. He worked with Dennis Perrot in Brittany for a while, which is where his interest in painting boats and harbours started.

He now lives in West Chelborough, Dorset, where this passion for painting nautical scenes continues. His admirers say his paintings make them happy with their energy, colour and movement.

Christine Wilmshurst was born in the Midlands but has spent all of her adult life in the South. The last thirteen years have been dedicated to both teaching adult classes and creating her own work. She has exhibited at various venues in Dorset and Hampshire and has been a participant in Dorset Art Weeks since 2010.

She draws inspiration from landscapes and townscapes, mainly around Dorset and from her travels further afield, but also enjoys painting flowers, gardens and still life.

Colour is the most important element to Chris, but she has also recently been drawn to textures and patterns and has started introducing a lot of collage into her work. She loves using vibrant colours combined with a variety of different papers to create something unique.