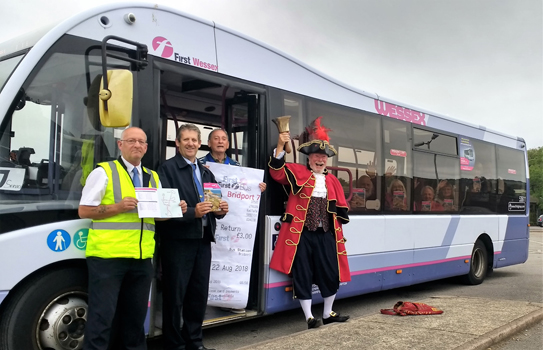 Following a review of Service 7, the round-Bridport bus service set up last August by the Town Council, a new route and timetable will take effect from 6 March 2019.  The changes divide the current single loop into two serving different areas, meaning more regular trips to the town centre, and shorter journey times for passengers.

The service is running as a ‘use it or lose it’ pilot until August 2019 on Wednesdays and Saturdays to coincide with the Bridport Market, with funding from Bridport Town Council, Bradpole Parish Council and Allington Parish Council.  Town Council Leader Cllr Sarah Williams says that passenger numbers haven’t been as high as hoped so far, but hopes the changes will make the bus a more attractive option.  Cllr Williams said “We do need to see more people using the Number 7 bus before we can say the community benefit matches the cost.  We’ve listened to comments on the service and we know the journey times have been a concern.  The new route will address that by coming into the centre more often.  One particular part of the route will see a journey of 45 minutes reduce to just four minutes!”

The changes will also see the bus visit Bridport Hospital.  Cllr Williams said, “We had some feedback that suggested this would be a helpful addition so we’re happy to give it a try.”

Fares will remain unchanged at £2 single or £3 return (under 16s £1 single and under 5s free), and Town Clerk Will Austin said the Council was keen to encourage concessionary pass holders to buy a ticket if they could afford it.  “None of the funding from bus pass journeys comes to the councils that are funding the service and it will help sustain the service if passengers pay the fare, but obviously only if it’s within their means.”

The additional visits to the town centre mean that the bus won’t travel to and from West Bay.  Mr Austin said “West Bay is already well served by the X53 and as a result, hardly anyone uses Service 7 for that journey.  We don’t think it’ll adversely affect West Bay but of course, we will continue to listen to comments about how the service is working, and if needed we can look again.  We’re keen to see this important community initiative succeed.”

Details of the new route and timetable are available from Bridport Tourist Information Centre, and the Bridport Town Council offices at Mountfield, Rax Lane, or can be downloaded from https://goo.gl/7rBNQG 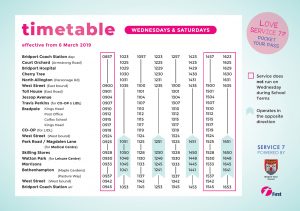