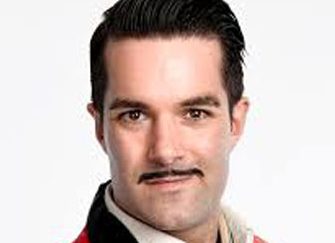 A QUICK look at the photo of Troy Hawke transports you back to the 1930s – sophisticated and charming, obviously a man to sweep you off your feet. But this Errol Flynn for the 21st century is not all he seems as the audience will discover when he comes to Bridport Arts Centre’s Comedy Cafe on Wednesday 21st March.
Troy Hawke is one of the personae of Milo McCabe, a character comedian who has twice been nominated for the Amused Moose Best Edinburgh show award.
A genuinely mixed up character, Troy tackles modern issues head-on in a uniquely untimely manner. He is an erudite homeschooled 1930s throwback, educated, sophisticated, but utterly clueless!