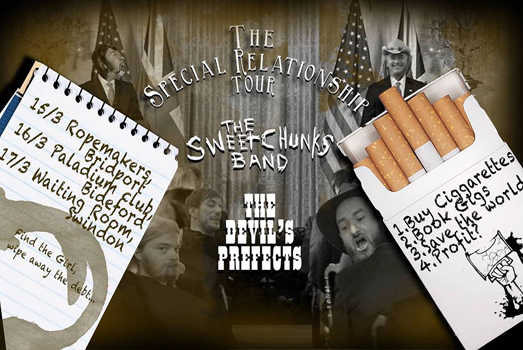 The Sweetchunks Band create a memorable evening of fun and dancing. The festivals they have played so far in the UK include Isle of Wight Festival, Beautiful Days, Mudfest, Watchet, Bearded Theory, Something to Smile About and many more. They have supported acts including Chas and Dave, The Wurzels, Hobo Jones & the Junkyard Dogs, Professor Elemental, Ferocious Dog and The Beards.

The Devil’s Prefects – Country music with its tongue firmly jammed in its cheek. Johnny “Country” Crow and Willie “The Fury” Ford are a country duo; two men and a guitar, bringing you songs about beer, automobiles, trailers, zombies, television and more beer.

With a nod to Johnny Cash and a wink to Elvis, this is what happens when country music goes bad. These boys do for country music what Scooby Doo did for paranormal investigation. Bring your cowboy hat, we know you have one! “Had the whole field singing along to instant classics” – ukfestivalguides.com “A hilarious country & western pastiche” – efestivals.co.uk

The Sweetchunks Band / The Devil’s Prefects at The Ropemakers Bridport