The inaugural Melplash Cider Festival, held on 21 April, was a thundering success. Picking up the mantle from the seminal and highly regarded Powerstock Cider Festival, created by Nick Poole 17 years ago, the Melplash Cider Festival followed Powerstock’s winning format with a cider competition in the afternoon flowing into a lively evening of cider and roof-raising music. The afternoon was blessed with glorious April sunshine as professional and amateur cider makers from far and wide, including from Dorset, Somerset, Herefordshire, Gloucestershire, Kent, Wales and France, congregated in the Melplash Village Hall for an afternoon of good company, catching up with old friends, cider-knowledge sharing and the all-important peer-judged cider competition.

The competition was divided into three classes – sweet, medium and dry – with each cider producer (with advice from their entourage) judging all of the entries. The judges each applied their own criteria, including taste, colour, and the surprisingly tricky art of identifying your own cider. In the all-important results, it was a clean sweep for Dorset ciders, with Dorset Star from Chalmington picking up first prizes in the Dry and Medium categories and Waytown’s Dorset Nectar picking up first in the Sweet category. Meanwhile, Nick Poole established that he is still very much involved in the cider world with a second and a third for his West Milton Cider. 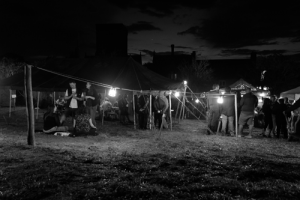 At 6pm the doors opened to the ticket-buying public and an evening of cider and revelry ensued, with sustenance provided by pasties from Kernow Pastries and venison burgers, pork and cider hot dogs and burritos from Dorset Star Catering. The cider makers generously donated cider to the festival, with all proceeds from the entry and cider tickets going towards the purchase of a defibrillator for the village, the upkeep of the Melplash Village Hall and a charity nominated by the Ashford family who kindly allowed the use of their field. Thanks is also due to Bridport TIC, The Corner Garage in Melplash and The Pursuit of Hoppiness for their assistance in the sale of the tickets. As the sun set the skies darkened and the festival-goers were treated to a spectacular lightning display and thunderstorm, with an unlucky few caught by the brief torrential rain. A happy majority were able to enjoy the impromptu natural light-show from the shelter of the rustic mess tent supplied by Dorset Nectar. The evening reached a new pitch as the Skimmity Hitchers took to the stage and treated the revellers to a roof-raising set which was greatly enjoyed by both Scrumpy & Western aficionados and new (and sometimes not so young) converts. The day – and evening – was declared a resounding success by both cider makers and festival-goers, and the committee is already looking forward to staging the event next year.

Details of all of the cider producers can be found on the website melplashciderfestival.org.