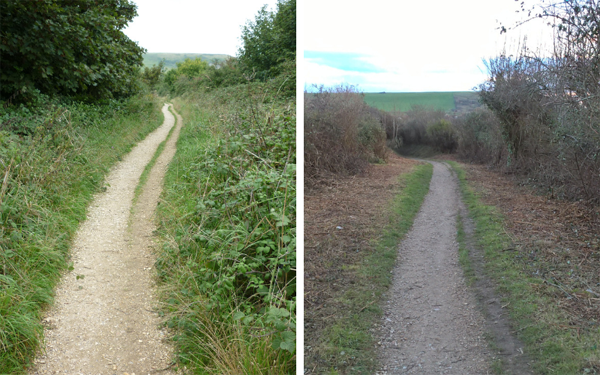 Work is underway in Bridport to transform an overgrown, under-used bridleway into a valuable sustainable transport link and wildlife haven.

Dorset Highways is reclaiming the West Bay ‘spur’ old railway line by clearing vegetation to enable the creation of an accessible cycleway/footway.

Following years of little maintenance, the trail has been swamped by nettles and brambles, which has made access difficult for users and has choked the natural habitat of many species.

After the removal of the train lines, the 5m-wide railway spur was first converted into a 2.5m wide bridleway, and this width has gradually reduced to a narrow path as scrub has taken over. The cycleway works include cutting back the scrub and widening some parts to 3m so walkers and cyclists can easily pass each other.

The cycleway will form part of a wider network for Bridport, which aims to reduce congestion and pollution as well as promoting health and well-being.

John Sellgren, executive director for place, said: “Reducing reliance on car use reduces congestion, pollution, carbon emissions; it is better for the environment, and people’s health.

“We know from the last census in 2011 that there is a large number of no car households in Bridport, and this route will enable more people to walk and cycle between the two towns in greater safety, as well as not having to rely on a car.”

The Bridport Walking and Cycling Network will soon be connected to the West Dorset Trailway – linking many villages along the route of the former railway line up to Maiden Newton.

Mr Sellgren said: “Dorset has a rich environment and every highway scheme we design is overseen by our ecologists to make sure we continue to protect our wildlife, and to identify opportunities for improving natural habitats within our roadside verges.

“We are keeping an environmental watching brief on site and, where necessary, making small changes to the design and developing our mitigation measures as we progress. This includes acting on information from concerned residents where they have information on wildlife sightings in the immediate area.”

Along Burton Road, where there has been local concern for orchids, all areas of turf – which would otherwise be lost to the cycleway – are being translocated/reused, and all topsoil is being reused and re-seeded with native grass species if necessary.

In the future, this area of grass will be managed by cut and collect which will gradually reduce fertility and lead to more wildflowers – including orchids – along all sections of the cycleway.

Along the railway spur, an area of grass where glow worms have been reported is being carefully translocated to areas where the scrub has been cleared. In other areas, the removal of dense scrub and rubbish will enable creation of new areas of wildflower grassland – which will allow glow worms and butterflies to thrive.

The grassland along the old railway line will also be managed by cut and collect to encourage and support local species of wildflower, butterflies and insects.

A damson tree, which had to be removed for the cycleway, is being replaced by another damson and two other fruit trees which will be planted along the western edge of the path.

In the next few weeks the clearance work will be finished, and from Monday 15 April workers will start to lay asphalt along the West Bay railway spur – starting at the northern end and working towards West Bay.

The new asphalt surface will last longer and need less maintenance than the current path, it will also make the trail usable for wheelchair and mobility scooter users, as well as parents with pushchairs.

The final surface will have a surface dressing finish to improve grip for horses and for it to look more in keeping with the rural nature of the trail.