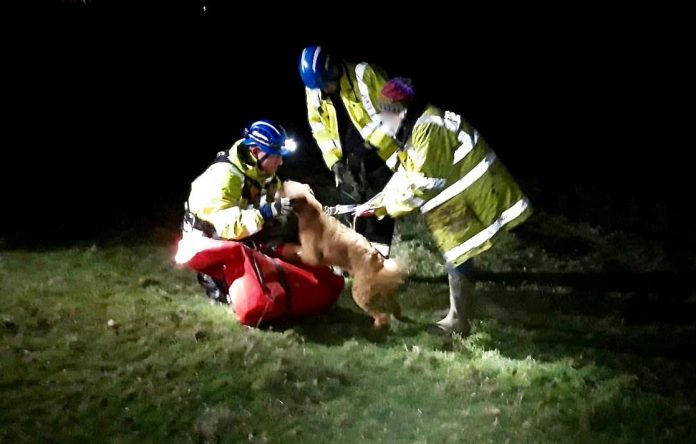 For the first tasking of 2020, the West Bay and Lyme Regis Coastguard Rescue teams were alerted on Sunday afternoon by Solent Coastguard NMOC (National Maritime Operations Centre) to reports of an Irish Terrier called ‘Percy’ that had fallen down Ridge Cliff just to the East of Seatown.

Officers from West Bay quickly made their way to the station to pick up their equipment and rescue vehicle, then headed straight to the area to RV with the Lyme Regis team.

Access to the incident area was hampered by poor ground conditions, so the teams drove as far as they safely could using their 4×4’s, before leaving the vehicles behind and carrying their equipment the rest of the way on foot.

On arrival, officers spoke with the owners to get a clearer idea of where Percy may have gone over, and roped Edge Safety Officers were deployed to look over the edge of the cliff.

Due to the failing light combined with area’s of the cliff obscuring vision, no positive sightings of Percy were made and he was not responding to calls or whistles.

Under the command of the West Bay OIC (Officer in charge) a Cliff Technician was rigged and deployed down the cliff face to try and get a closer look at the mid cliff levels to see if any trace of Percy could be found.

Under torchlight, a pair of eyes were spotted by the Cliff Technician about half way down the cliff just to the East in an area of thick brambles and vegetation.

Approaching closer, Percy was heard rustling and responding to his name, but unfortunately he was not in a recoverable position with the existing rescue set-up, so the Technician was recovered back to the top of the cliff.

With Percy’s position now known, the rope rescue system was re-positioned further to the East and the Technician was re-deployed, this time descending to the dogs exact position.

Percy was found to be caught within the thick vegetation on a steep part of the cliff, but was very glad of some company and was safely extracted then secured into the teams animal rescue bag.

Both dog and Coastguard Officer were then winched back to the top of the cliff where Percy was reunited with his very relieved and thankful owner.

This was the second time in 7 days that we had been called to this area for a dog over the cliff, and we ask dog owners to take care and remain vigilant as not all dogs will be as lucky as Percy.

We however applaud Percy’s owners for immediately calling the Coastguard when they found themselves in difficulty, rather than attempting a self rescue which can all too easily put human lives at risk.

Always keep your dog on a lead whilst walking on the cliffs.

Should an incident occur, never attempt a self rescue as you could be putting your own life at risk.

Instead, dial 999 and ask for the COASTGUARD who will send a specially trained Cliff Rescue team to assist you.