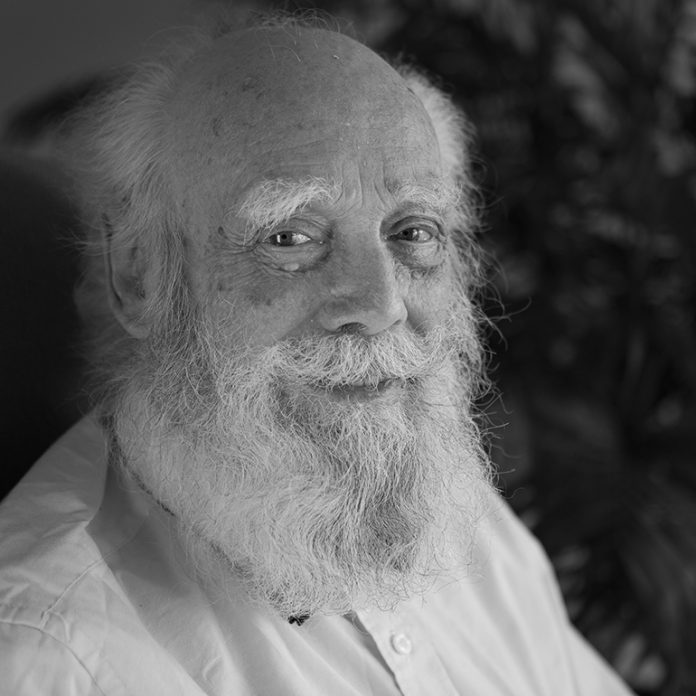 ‘I was born at 9 o’clock in the evening on the 28th November 1932, in Morden in Surrey. My father was born in Wandsworth, my mother in Battersea; my father worked at the Seamen’s National Insurance Society. When my parents bought the house in Morden you could see across fields to the underground station, but of course that view’s gone now. I went to the local LCC schools, passed a scholarship in about 1943 and started at Mitcham secondary school for boys in 1944. That was upgraded by Rab Butler in the 1944 Education Act to a Grammar School, but it made very little difference—the pupils were just as daft and the teachers just as egotistical.

Although that part of London avoided the worst of the blitz, I can remember the doodle-bugs, the German V-1 flying bombs. One landed behind the houses opposite. Fortunately my father was there, and he shoved us all into the cupboard under the stairs when he heard it coming. There was an enormous bang and everything jumped; all you could see was dust and a light patch where the front door had been. My father got us—my mother, brother, and myself—installed in the Anderson shelter, and went off to help pull people out of the wreckage. I think 7 people were killed there. The neighbours had family in Northamptonshire, and they offered to take us in for a while. So we stayed there, and although there were no air raids, there were several American bases so we’d see the Flying Fortresses coming and going. I remember seeing one crash; the pilot managed to keep it airborne long enough for the crew to parachute to safety, but there was quite a firework display when the incendiaries and flares went up when it hit the ground.

Back in London, after school I decided to go into printing, and went to the Croydon School of Art for a pre-printing course. In 1948, at the age of 16, I started a 6-year apprenticeship with a firm in London. I worked another 4 years as a journeyman, and was then offered a job as a night overseer with a firm in Caterham, which I did for 5 years, all night work. I worked in Canterbury for a while, which didn’t work out, and then in the printing department of Scotland Yard. I got married in 1956, and my wife and I moved to Gloucestershire, where I first worked in Stroud, then in Cheltenham. We lived at first in a mobile home, then we managed to buy a bungalow. After my father died in 1968 we started moving from place to place, working at different jobs all over the country. I had a job in Exeter, living in Exmouth, then Shrewsbury; we lived as far north as Berwick-on-Tweed, as far east as Great Yarmouth, and as far west as Conwy in Wales. I think I had about 20 jobs, and the last few years it was trying to keep one jump ahead of redundancy because of how the printing world was changing. Most of my working life it was all hot metal printing and that was coming to an end with computerisation, although I learned monotype printing at the keyboard towards the end of my working life. I was always an avid reader, and loved books; my father had suggested I’d be good as a compositor because I was good at spelling, and I enjoyed my work, although was quite hard physically, 8 hours of standing a day. And in London on the Northern line it was all standing going to work and standing going home again. Most of the printed products were trade journals, but they were such high quality, something you wouldn’t find today.
My friend’s firm in Exeter where I was working went bankrupt, and then I was made redundant from my next job 2 years before retirement, which was a bit of a bind. We knew about Hanover Housing, a housing association designed for older people, because my mother had been in one in Norwich, and when a new one became available in Charmouth we went there. And then in 1997 we managed to get this flat in Bridport at Hanover Court. My wife and I separated in 1998, and in 2009 she sadly died of cancer, so I’ve been on my own ever since. Although, that isn’t really true, with the number of friends I’ve now got.
When Gaby was the manager at the Electric Palace, and Jess the assistant manager, I used to go there for a coffee. I said to Gaby how expensive it would be to watch all the opera they show on screen there, and she suggested I could go along as a steward, and  I’ve been doing it ever since. So then I offered to steward there as often as I could, and helped out during the day a bit as well. I managed to go along nearly every time there was a gig, and it’s been a wonderful life.

I started at the Palace in 2010, and a year later Claire Shilton persuaded me to go as the bouncer at the Frolic Disco. I also do a couple of hours as a steward at the Town Hall for the Hat Festival. It’s just greeting people and showing them where to go if they’re new, helping people in wheelchairs, etc. Basically I just stand there looking pretty. I quite often dress up, once as a pirate when they had the Swallows and Amazons pantomime, and I dressed as a carrot when we had the Wurzels on. I’ve got a Father Christmas outfit for the late-night Christmas shopping, and the Christmas Frolics. I love the pantomimes, seeing the kids of all different ages enjoying it in different ways. And people like to see me there somehow, it’s nice. It’s been an amazing education for me.

Opera and ballet are my favourite things, but I enjoy all the music gigs because I can mix with people, and I’ll try anything once so I’m open to all sorts of music. Plays, too, and films I’ll go in and watch. And I go to the Arts Centre to watch ballet and opera on screen there too. I still listen to jazz at home sometimes; I used to be a big jazz fan, from the days when you could buy a 78rpm gramophone record for 4s4d. I must admit I do miss going to the Royal Opera House in Covent Garden. I saw Margot Fonteyn there once, who’d been away for a while recovering from an injury, and despite her appearing on stage discreetly there was a huge roar from the audience when they caught sight of her, quite an emotional moment.

But we’re so lucky with all the wonderful music we can see here. I went to a concert at the Arts Centre a couple of years ago, Tamsin Waley-Cohen playing a Beethoven violin and piano sonata. The second movement was one of the most moving things I’d ever heard, one of those things you’d never forget, and when it finished I couldn’t help myself, I just said softly “that’s beautiful”. I haven’t got any money, but I think I’m the richest man in Bridport. People come up to me in the street and say “hello Allan, it was good last night, wasn’t it”, and I’m sure I’ve never seen them before, but that’s so great. I see so many people, and I’m sure when my wife died if anyone had told me what my life was going to be like now, I would have just laughed.’