Home History The Spirit of Jack Daniels: a ghost story 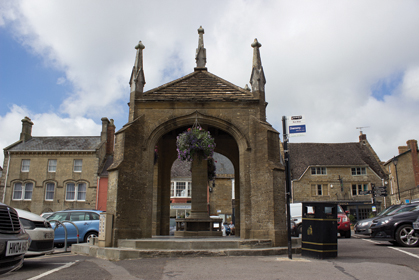 DURING the festive season we have the solstice and then on the 24th, we may think of a roaring log fire, a half-eaten carrot and glass of sherry on the hearth, perhaps with a smattering of snow marked by reindeer footprints. Then with the curtains drawn, we might think of local ghost stories, as people did years ago. The ghost story recounted here is macabre and disturbing.

This ghost story is not about an American whisky, but about a boy with a similar name, John Daniel, who was nearly 14 years old in 1728, living in Beaminster. The story is not for the faint-hearted, being a ghost story with more detail than is often the case.

John was not in good health and lived with his stepmother Elizabeth and his ten-year-old half-brother Isaac in Hogshill Street. John was sent by his stepmother to look after her cows around midday, near to midsummer, but did not return that evening and apparently, she did nothing about his absence. Early next morning his body was found lying on a small island in one of the local streams about a furlong from his home. A written description states that he was “lying in a very odd posture…with several black or blue spots round his neck and on his breast and belly, which tokens of violence…” Despite the unusual circumstances, there was no evidence that his death was unnatural and he was buried on Saturday 1st June in Beaminster churchyard.

In those days boys up to about fourteen years of age were schooled in the parish church gallery by the schoolmaster John Guppy on Saturday mornings. On the 22nd June, he dismissed the class just before midday and about a dozen went out to play ball in the churchyard whilst three or four remained to sweep the gallery. They heard a noise like a small bell being rung, gradually coming nearer. The boys ran from the gallery and down the stairs to tell their friends in the churchyard that they thought someone was hiding in the schoolroom to frighten them. One boy fell on the stairs and bruised himself. The boys returned to the gallery but found nothing untoward, so most returned to play in the churchyard. Those remaining in the gallery heard noises which were confused in their subsequent descriptions, such as the minister preaching, a congregation singing psalms or someone in boots on the stairs. One boy who returned to the schoolroom to collect his book saw what appeared to be a white coffin with brass nails standing on a desk at the far end of the gallery. From the churchyard near the door, which opened inwards at the foot of the stairs, it was possible to look up to the gallery and the coffin was seen by four or five boys at the doorway. They saw a piece of tape hanging from one handle of the coffin and the apparition of John Daniel in his school clothes sitting at his desk next to it. He had a hat partially over his face and one hand bound up with linen cloth as on the morning prior to his death. Some boys only saw part of the apparition and others, curious, returned to see it, until Isaac cried “there sits our John…I’ll throw a stone at him” as he did so he shouted, “there Johnnie, take it”. Immediately the whole church became dark although it was a clear day. After a few minutes, the darkness lifted but the apparition had disappeared. The terrified boys ran from the churchyard, some falling over a low wall, alarming other people nearby.

The event made people even more suspicious that John might have been murdered and they went to Colonel Brodrepp of Mapperton Manor, JP for Beaminster. He saw all involved including eight of the schoolboys, interviewed separately. Each boy told a similar story, including a new boy who had never known John and he described the apparition in detail, his clothes and the white rag on his hand etc.

The body was exhumed and an inquest was held two weeks after the apparition, at the Kings Arms, probably on Saturday 6th July, including at least 38 witnesses. The coroner was George Filliter, Wareham Town Clerk, attorney and solicitor. Two boys were overheard saying “there is the gartering we saw on the coffin handle when it lay on the writing desk” but the sexton and others present at the funeral could not remember anything tied on the handle. Two women who had seen the corpse two days after it was found had discovered a strip of black cloth around the throat. A surgeon could not confirm any dislocation of the neck. The verdict of the jury was strangulation. Was it murder? No one was accused.

One possible suspect was John’s stepmother, Elizabeth Daniel, who was described in a contemporary document as “before this accident was very gay, singing and merry, has since by the affected to sing but it is observed by the neighbourhood that she pined away. Her lips wale, and in this time in an infirm way”.

Some six weeks after the apparition of John Daniel a second appeared, again in the church during school. A girl of about 14 saw a woman in a dark gown with a flowered neckerchief and straw hat push open the door and look up. The girl immediately told the schoolmaster, believing the woman wished to speak to him. As he descended the steps the door slammed and when he went outside there was no one to be seen. The minister also heard the door slam and they questioned the girl who described the woman as slim, “rosier with the pox” and a pale face. On hearing the description neighbours said it must be the ghost of John Daniel’s own mother who had died about the time of the girl’s birth. Following this event, there were no more apparitions in the church.

Elizabeth Daniel married again to Henry Gould a year or two after the death of her stepson John. The Daniel family continued to prosper, but the name ended in Beaminster some twenty years ago.

This story is based on a booklet The Death and Times of John Daniel by Marie de G. Eedle and Raymond E. Paul published in 1987 and still available from Beaminster Museum. I knew both authors via our mutual interests in family history before they went to join John Daniel.

I hope this story will not put you off your Christmas dinner or disturb your sleep. And I wish you a very happy and peaceful Christmas.