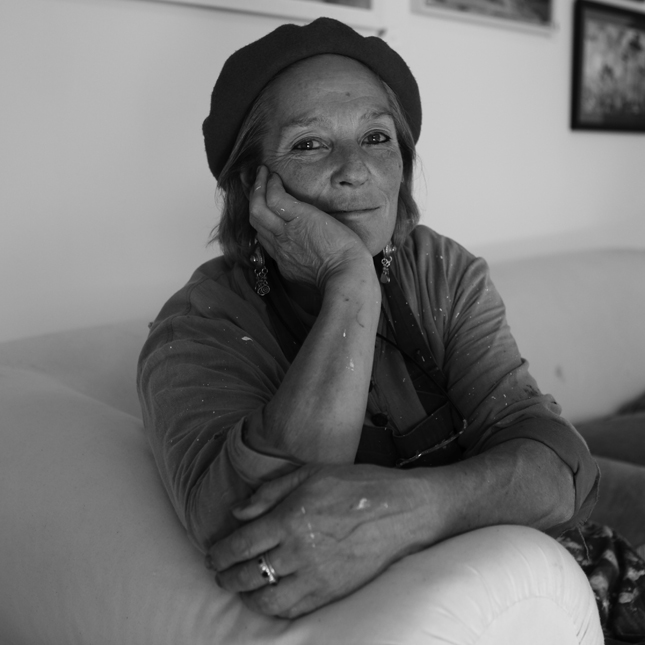 ‘My father was in the Army and made the most of the various sporting opportunities which army life offered after the war, riding in point to points in Germany and representing Great Britain as part of the army Pentathlon team in both Switzerland and Sweden. When I was born he was stationed in Colchester and spent much of his time during my childhood hunting the Colchester Garrison Beagles, a pastime which gave all the family a busy rural social life. Money was scarce in those days and we lived in a number of different houses in Essex and Suffolk which my mother would renovate and improve before selling and moving on to do the same to another one. I have an older sister and two younger brothers who we used to bully incessantly until they became bigger than us and the tables were turned. My mother had been a radiographer in a medical practice before she married but now had her hands full with four children, so we were frequently left to entertain ourselves. Our young lives were full of fun and very sociable. We had dogs and ponies and lots of freedom, and would gallop out of control across the countryside, often ending up in trouble with local farmers for straying over their land.

When I was thirteen we moved to Dorset and my sister and I were packed off to Sherborne School for Girls, where we were expected to behave like young ladies. After so much freedom I found it rather hard to adjust to the restrictions of boarding school life and at the age of sixteen, following an incident which resulted in the games mistress being pushed into the swimming pool, it was agreed that it would probably be better for me to leave and go to a crammer in London to sit the necessary exams. There was such fun to be had in London in those days and I met a great bunch of friends, most of whom had also left their schools early for various reasons. While there I decided that I’d like to go on to Art School. My parents weren’t enthusiastic, but I’d always enjoyed drawing and was quite determined and enrolled at the Sir John Cass School of Art in Whitechapel. Halfway through the course I disappeared to Greece with a friend and failed to return in time for the beginning of term, so that was the end of that. By then my parents were living near Colchester again, and suitably chastened I returned home and embarked on another foundation course, this time at Colchester Art School. The only place left was in the sculpture department which was brilliant, and turned out to be quite a turning point. It spurred me on to look for a place on a degree course, and I was accepted by Chelsea School of Art. The sculpture department had some amazing teachers like Nigel Hall and some great technicians who taught me invaluable skills like welding and using angle grinders. Anish Kapoor was there doing an MA and Chelsea had become quite conceptual in its teaching, the last figurative tutor probably being Liz Frink who had left two years before I arrived. There was no life drawing organised and it took me a while to get used to abstract practice, but in the end Chelsea taught me not only the technical skills, but more importantly how to think about my work and question my thinking. Being at art school in London in the early seventies was a fairly hedonistic experience and involved a somewhat anarchistic lifestyle, but I did succeed in getting a degree.

Few people can leave Art School and immediately start to earn a living as an artist, and I was no exception. I joined an agency who sent me to decorate a property in Barnes. In no time word had spread and two other decorating jobs had followed. Around this time I met Johnny and again my life changed. Four years older than me, he had travelled and done many different things and unusual jobs in the UK and elsewhere, but had finally accepted the inevitable and settled down to take up his first office job as a shipbroker in the City. He had a large Yamaha 750 motorcycle and we spent our evenings and weekends careering around town and going on long bike trips to stay with friends in the country or in France. My parents were understandably wary of him in those days, but I ignored their warnings and we were married the following year. I must add that they and he are now the best of friends!

I had recently started a training course which involved teaching teenagers art in the East End but I didn’t enjoy it. Johnny persuaded me to call it a day and concentrate on making a proper business out of the ever-increasing number of decorating jobs. The business took off on the back of the property boom of the 1980s and before long I was running two or three teams of builders and decorators installing bathrooms and kitchens and decorating whole houses. Johnny had by now abandoned his attempt to become a shipbroker and took over the admin and much of the organisation. The business flourished for the next five or six years until the arrival of children ushered in a new era in our lives.

By the time Tommy and Emma were both at school I was becoming desperate to return to my art. At the same time we had begun to feel the need to move out of London and find more space for all the family. We were aware that the surge in property prices had made it possible to exchange a small terraced Victorian house in Battersea for a substantial property in the country and started looking for somewhere in Dorset. We ended up at Abbotts Wootton in the depths of the Marshwood Vale not knowing a soul within fifty miles. Despite the beautiful surroundings it was difficult and strange at first, but after a while we acquired a great circle of friends and it proved a magical place for the children to grow up. Now after twenty-two years I can’t imagine life anywhere else. Our children have grown up and left home but often return to spend time here. They are both free spirits and have spent much of their adult lives abroad. Tommy is now married and works as a freelance journalist in Africa and the Middle East, and Emma is an artist who has recently travelled to Mongolia and back on a Vespa!

Before we left London I had tentatively returned to working as an artist and had already accepted a few commissions for portrait sculptures and the odd mural. I had also begun to wind up the decorating business and was giving morning art classes to groups of mothers with school-age children. When we moved to Dorset I immediately set about trying to establish both the sculpture and some classes in our new home. Gradually by word of mouth two new businesses emerged and developed, and together with Johnny’s business importing ceramic pottery from Sicily, they have formed the basis of our life here ever since.

Apart from my family, my two passions in life are my art and my garden. I regard myself as extremely lucky to have had the chance to satisfy my creative side in so many ways and to have the use of such a spacious studio. It would be impossible without it to produce such large sculptures, or to have all the classes and courses which I now give. Being an artist of any kind can be a solitary and introspective business, but the regular art classes provide company and a refreshing break. It gives me huge pleasure to help people develop their talents and I firmly believe that everyone has within them the ability to sculpt and to draw, but few people have the opportunity or find the time to discover it.’