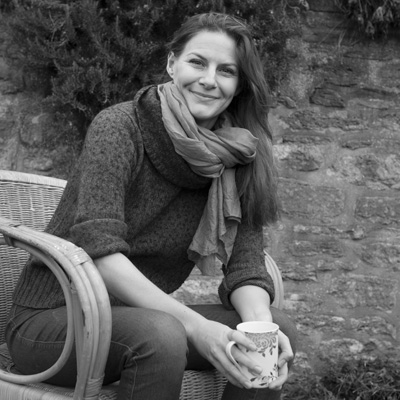 ‘When my husband Chris got taken on by the Foreign and Commonwealth, I was given some advice by a fearsome ex-ambassador’s wife: “Get an English teaching certificate so that you have something to keep you occupied while the children are at boarding school.” It sounded very far from the life I knew, or any kind of future I’d imagined for myself. At the time, I felt sick at the prospect of so utterly giving up my identity, but ultimately, I think she did us a favour. She galvinised us to focus on what was important to us. We’ve both worked hard to make sure the bleak vision of diplomatic life she painted has not come to pass, that I’ve got the most out of life abroad, and we’ve kept our kids with us while we travel.

I was born in London, but grew up in East Devon, near Stockland, on a beautiful small-holding owned by my mum, an art therapist, and dad, a writer, social worker and journalist. My younger brother and I had free run of the fields and we grew up with sheep, geese, chickens, dogs, cats and even, for a couple of years, a shaggy pony with whom I roamed the lanes. I always felt a bit of a hippy-outsider at primary school, where pretty much everyone else seemed to be related to each other, but at Honiton Community College I discovered music, literature, languages and the yearly, yearned-for school play. I set my heart on being an actress.

When I got into Cambridge to read English a few years later, I realised my ambition of joining Footlights. I wrote and performed comedy for Footlights’ ‘smokers’ (which often took place in smoky, mouldering basements), and played roles in Shakespeare productions in America and Korea. After graduating, I dreamed of the RSC, but touring in small scale theatre, acting in low budget films and a lot of waitressing was more the size of it. When I met my husband, it was time for a change; I jacked in acting and worked as a corporate trainer, teaching voice and presentation skills.

Our first diplomatic post was Japan. It was very far from home and very foreign—I couldn’t even recognise the vegetables! I was homesick, that first year, living in a tiny seaside town while we learnt Japanese. My Japanese tutor kept trying to turn me into an erito rady (elite lady), by teaching me how to make tea and arrange flowers, but it just wasn’t me. With some relief, we moved to a tiny 10th floor apartment that overlooked the bright lights of Tokyo. Tokyo is a crazy city, a place that never sleeps and is constantly reinventing itself-we had a lot of fun and I don’t remember sleeping much myself.  I went back to acting, mostly in commercials. In Japan, only villains have British accents, so all my roles as cute blonde foreigner (I went bottle-blonde for the Japanese market) involved faking an American accent; one involved being a mermaid being caught on the end of a fisherman’s pot-noodle-baited line. I also played Greta Garbo in a cult Japanese movie franchise. I was killed off after 10 minutes by being pushed from a moving train and got to scream loudly while leaping out onto an inflatable mat. All very ‘Lost in Translation’!

I became pregnant in my last year in Tokyo. Japanese women are expected to give birth very demurely, with no shouting and no pain relief. I moo-ed like a cow and tried to punch the obstetrician, but safely delivered my daughter Cara.

I inevitably learned that acting doesn’t easily combine with motherhood, so when we moved back to the UK, I re-trained as a breastfeeding peer supporter; the UK has the lowest breastfeeding rates in the world, and not nearly enough support for new mums. I’d loved breastfeeding, so I felt it was something I could help others with. When our second daughter Sylvie was a year-old I started work in a hospital and did home visits to new mums, which for the first time helped me feel really connected with London. I qualified as a lactation consultant so I could work on our next posting, to Addis Ababa, Ethiopia.

It’s an incredible privilege to represent Britain abroad, and to really get to know other countries, but as a diplomatic spouse, I’m a bit of a liability. I have never really believed in ironing, have no interest in table plans and a tendency to talk about nipples at polite functions.

One day, one of the giant tortoises on the British embassy compound in Addis had an infected leg and was being eaten alive by ants, so I called the vet. When a man arrived, I rushed him into the back garden and made him examine the tortoise. He wasn’t very forthcoming, so eventually I asked, “Well, what do you think?” He apologised, and said, “I’m sorry, I don’t know anything about tortoises. I’m the New Zealand ambassador!” He’d come for a meeting with my husband. The vet turned up 10 minutes later.

On another occasion, Chris was having a meeting in our living room with the very grand ‘Sultan of Afar’ who wore fine robes and a turban. I had been bathing the kids and had turned my back to get their pyjamas. I returned to find them, both stark naked, outside the door of the meeting room. The youngest was perched on top of a toy van, which her sister was revving, telling her, “OK, I’m going to open the door and push you in. 1…2…” I just managed to avert an embarrassing incident.

In Ethiopia I found volunteer work at a big public hospital on their neonatal intensive care ward. The hospital served the poorest, high-risk mums in the community; a bed for the night there cost about £1. I’d often come home in tears at the unfairness of life for these women and babies. The experience inspired my novel, Open My Eyes, That I May See Marvellous Things, which tells the story of a midwife who falls in love with an abandoned newborn. It deals with attachment, loss and the power of touch to remind us what it is to be human.

We’re currently posted in Uzbekistan. I’m writing and doing a MSc in Public Health. Fortunately, nowadays, ambassadors’ wives aren’t obliged to be the hostess with the most-ess (a good thing, since my inquisitive Ethiopian street-dog Frank has a habit of sticking his nose up people’s skirts at functions). My parents have just moved to friendly Bridport. Wherever I’ve lived in the world, the West-Country is a much-needed anchor. I return home as often as I can to the green hills of Devon and Dorset. They’re where I find most peace.’